Along my adventure of writing and publishing my first children’s book, I found this gem of a woman; writer, editor and “Jill of all Trades,” Janet W. Butler.  My experience with Janet as an editor was such a wonderful one that I knew I had stumbled onto something great.

-Janet, when did you start to write?

I’ve been telling stories since I was 10, including writing them down — and even trying to illustrate them. (This was a disaster, as I cannot draw!) When people ask this question, they usually mean, “When did you start seriously writing?” To that, I can say I was in my teens; I entered a short story competition for Seventeen magazine when I was 17.

- As a writer what have been your greatest accomplishments?

1) Winning the Golden Heart, RWA’s top award for unpublished manuscripts, in 1998. This came as a result of 10 YEARS of visualizing and working toward that goal — 10 years of entering, of getting to semi-final rounds (when they still had semi-finals), of getting really high scores but never finaling; then — the first year I finaled, I won.

2) Publishing two novels, including the “book of my heart.”

3) Learning how to make a living with my freelance work. This is both easier and harder than most of us think it is!

4) Being mentioned in more than one author’s book in the acknowledgments. I am a sucker for praise, and any time I see my name in someone’s book, it just makes my day.

5) Teaching online writing workshops for six years, and being a regular guest on them to this day.

6) Speaking at writers’ conferences. I LOVE talking about writing, and if I can do it live in front of a real audience, that’s even more fun.

-What advice would you give someone who is setting out to write a great CHILDREN’S book?

All of this comes with the caveat that I’ve never written a children’s book. Bear that in mind.

The best advice I’ve ever heard for this is “think like a child.” I think you need to love children — sounds obvious, doesn’t it, but it’s not always the case! And I think you need to set aside your adult “stuff” long enough to get down where children are and see the world through their eyes. That doesn’t mean you talk “down” to them; if anything, children have way more complex thought processes than we often suspect, and they can grasp a lot of concepts at a pretty high level if we put them in very concrete terms. And be direct; children are direct little critters!

-For the rest of us just beginning our journey in writing, what do you think is the best way to make a reader stick to our book/story?

See earlier advice about “tell a terrific story.”  Now, we all know and lots of books succeed, even though they’re poorly written, if they tell a story people identify with. TOO badly written, however, doesn’t work, either — because bad writing gets in the way of telling that great story. Don’t be afraid to have your book edited; many people are under the mistaken impression that editors “wreck” books or try to make them “all alike.” Not true; the best of us want your book to be YOUR book, but the best darn book you can write. Too many writers were shorted on grammar training in school and honestly don’t know the difference between “affect” and “effect” or a thousand other word usage errors. Give it to a good editor: she’ll find and correct them.

If I could ask authors to do one thing above all else, it’s to check your facts as far as you possibly can. Nothing will get your reader more irritated than to have you mess up something you could easily have researched. I’m thinking about anachronisms — word usages that are wrong for the period of the story, cultural references that are “off,” slang that dates a book, etc. — among other things.  Other than bad writing or inept use of the language, that’s the thing that will get me tossing a book against the wall fast. Even if you are “sure” you know it…look it up. It never hurts.

– I understand that apart from your love of words, you are also passionate about music; do you find that one inspires the other?

Absolutely. In fact, there are whole books out there in song lyrics, just waiting to be written. (Too many books, too little time.) I personally wrote my Golden Heart-winning book from a song; I know authors who set up “playlists” of music to use when they’re writing a book. I find that when I’m working as a performer, I’m also better able to come up with creative story ideas.

-How has having a background in a wide variety of trades, ranging from editor to performer to waitress and school bus driver, influenced your writing?

It’s sometimes been a bit of a pain, actually, because I spot errors in books where people who haven’t done the jobs in question assume things about them and write the job wrong! Seriously, though, I think it makes it easier to create characters; when you spend time in a profession’s “shoes,” all you have to do for specific details is either do more of that kind of work or get in touch with someone who DOES it, and you can create realistic characters really doing the jobs you’re talking about them doing — and having the mindset of a person who does that work. That’s a crucial ingredient to really good characters.

-What do you believe makes a great book, be it in children’s or adult literature?

Tell me a terrific story; that’s first. Doesn’t matter what genre it is — if I can suspend disbelief and you keep me in that world, I won’t put the book down.

- What are your favorite children’s books?

I love One Fish, Two Fish, Red Fish, Blue Fish; Little Bear; Where the Wild Things Are; On Beyond Zebra; Clifford the Big Red Dog; and Hop on Pop, among others. I’m sure there are tons more books that after I do this interview, I’ll remember. But these are ones I actually have on my shelf now, in my office. 

-As a writer how much do you feel you’ve improved in the last few years?

That’s tough for me to say; I know I’ve become more aware of my own personal foibles and am more ruthless about going through and weeding them out. (We all have “pet” words we overuse — mine are “just,” “even,” “only,” and lately, “actually” and “basically” have crept in a lot.) I got better at writing fast when I did newspaper columns with twice-weekly deadlines; I’m better at nonfiction right now than I am at fiction, because I’m doing so much nonfiction writing and editing. What I have seen in my writing, personally, is that I need to peel away layers constantly to keep the “nonfiction” voice out of my fiction. It’s an occupational hazard of doing too much of one thing. For any other indicators, you’ve have to ask my critique partner.

-Tell us about your published novels?

I have two:  FROM THE ASHES is an inspirational romance that came out from SANDS Publishing in 2001; VOICE OF INNOCENCE is a romantic suspense from Desert Breeze Publishing in 2012. (Yes, I went 11 years without a published book. No, it wasn’t for lack of trying. ) FROM THE ASHES is a “Star is Born” story: two concert pianists, one whose career is on the way down, one whose star is rising — and how they learn to collaborate for life. VOICE OF INNOCENCE is that “book of my heart” I talked about: a man with a sword hanging over his head, and the woman who saves him…with a little help from beyond.

-Where can we find them?

FROM THE ASHES is presently out of print; I’m working on reselling it as a reprint, as the rights have reverted to me. However, I do have some hard copies of the original edition, which I’d be glad to sell to people (and autograph) in the meantime! Just e-mail me at jbutler824@aol.com, and we’ll talk about it.

OR…you can go to this link and buy them through Amazon, used:

VOICE OF INNOCENCE is an e-book that can be downloaded in various formats.

A caveat, too: some folks have dismissed these because they “never read romance.” Well…some of my best reviews have come from people who never read romance, but who loved these particular books because they’re different from conventional romance fiction. So take a chance — you just might enjoy them.

Thank you, Janet, Brilliant as always! 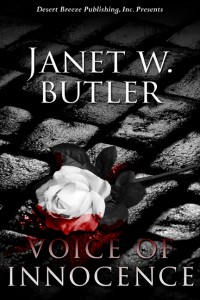 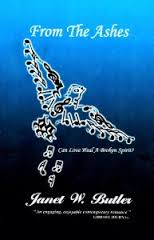