The Adventures of Zeppi #8 Castle Mountains Part 1- Trip to the Castle by C.K Omillin

The Adventures of Zeppi #8 Castle Mountains Part 1- Trip to the Castle by  C.K Omillin

I read The Adventures of Zeppi #8 Castle Mountains Part 1- Trip to the Castle by C.K Omillin

C.K Omillin is an author/illustrator of a series of Zeppi Adventure books, Zeppi is a penguin.  I read number 8 in the series,  and now wish I would have started at number one.

The book has beautiful water color and pencil illustrations,  but the word choice and narrative descriptions are so vivid that this book would be equally as captivating without them.  I have never been to a castle before, but if I ever did, I would open every door and peek in, I felt like I did just that after having finished the book.  Zeppi the penguin and his friend squirrel who he sneaks into the train in a suitcase, go on their first castle vacation. The two little creatures, get into a bit of mischief on the train ride, they behave like two curious young children, but have the advantage of being animals and therefore are given a lot of leeway in the human world. Being that they are little creatures they are also closer to nature  in ways that had the author chosen to make Zeppi a child would not have been possible. Zeppi the penguin uses expressions like “greenie” meaning to “care about ecology,” so yes this book has both brains and beauty. 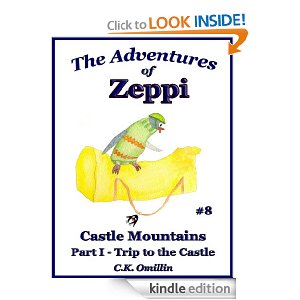 Now as far as passing the wholesome test… it did have a mention of a ghost which I do not read to my kids about, but I have yet to see if this is just a playful “Zeppi thought it was a ghost BUT…” for that I will read part #9 and let you know!