Have you ever wondered how culture and language influences a writer? Specifically a children’s picture book writer? An odd thing happens when I take my girls to the library here in Fukuoka, Japan. The library is packed from corner to corner with children’s  picture books, now, one thing about the Japanese culture, is that they really know how to do cute well “kawaii”, sweet, dreamy, pastel, eye-candy. When looking for picture books to read or look at with my girls, my eyes always seem to focus on “foreign” books. Western books, sometimes even European books. Why is that? Even without knowing the book previously, I am drawn to the ONE book that is most familiar in the style of which I am used to.

This got me wondering… how much of what writers choose to write about is influenced by previous readings? How can a children’s picture book writer think out-side-the-box when choosing WHAT to write about?

I picked up a book Mottainai Grandma by Mariko Shinju, and began reading it to my little one Yumi,  who is half-Japanese. Yumi, was born in and until recently had been raised in The States, she has a concept of culture, but at four not a very clear one. As I read, I marveled at how well the author had captured the spirit of MOTTAINAI, I though it was a clever read and could picture full Japanese children, giggling as they thought of their own grandmas. Yumi, not so much, she had no interest in the book, in fact, she disliked it, and we are talking about the kid that LOVES, LOVES, books, any and all.

I understood why Yumi, did not like the book, she could not relate to it. The writer chose to write about something, Japanese would find familiar and thus make for a clever and sweet read.

So I will do my best to give you a taste of MOTTAINAI.

Mottainai, is an expression that says “Don’t be wasteful!”  not unlike our “Reduce, Reuse, Recycle”, HOWEVER, this MOTTAINAI, requires ingenuity to find a useful purpose for something that might otherwise end up in the G-A-R-B-A-G-E (see you can’t even say that word in front of a Mottainai Grandma!)

So, to answer my own question… How much of what writers chose to write is influenced by culture and previous reads? A LOT, so stretch your horizons, explore different cultures through books. And check out Mottainai Grandma, who knows your little ones may love it! 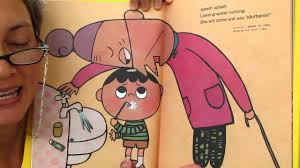 and in honor of Mottainai Grandma, our own Mottainai Great -Grandma WAKAKO who at 94 years old just finished making me a laundry basket out of recycled magazines and newspapers… the wonders of the Japanese…

Leave a Reply to Leti